Many residents of Glastonbury have been concerned throughout the summer of 2019 about the numbers of people living in vans and caravans on the roads and green spaces of the town.  At the same time, many people have expressed their support for those who are living in accommodation that is not standard “bricks & mortar”.

So what progress is being made to resolve these issues? 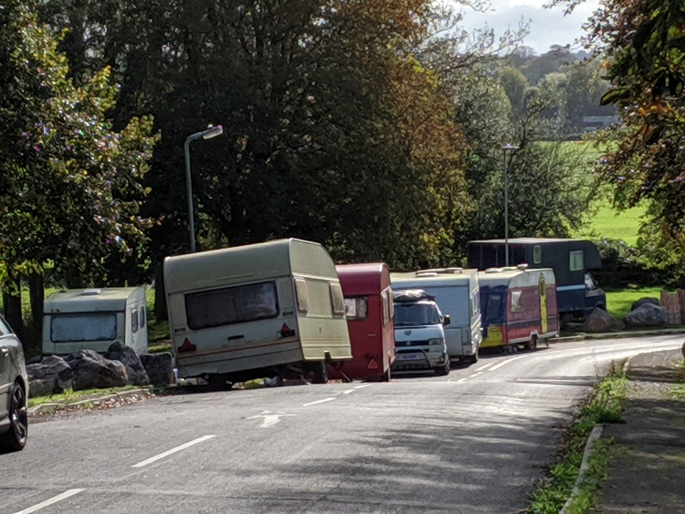 The Liberal Democrat administration at Mendip, elected in May, has just released an update on the actions taken in their first six months, as well as highlighting some of the serious issues that – they say – will take more time, resources and collaboration between the various authorities to resolve.

“Following the District Council elections in May of this year, we made Glastonbury one of our very first priorities,” says Cllr Ros Wyke, Leader of the Council, “acknowledging that the town is, and always has been, a very special place to live and to visit. Our ambition is to operate more holistically and to use Glastonbury as an opportunity to think differently, and I’m pleased to say that much work has already been completed in the first six months of the new Council – although much more still lies ahead.”

The Glastonbury Living Spaces Panel, chaired by Cllr Wyke herself, was set up to provide an overarching vision for creating more homes locally, as well as finding a permanent solution to the contentious issue of temporary sites.

“Several actions were taken to reverse what were felt to be unhelpful moves made by the previous Conservative administration,” she says. “They had pursued a Court action for eviction of people living on what is known as the Morlands site in Beckery and announced their intention to sell that site for economic development. We have temporarily paused that sale while we consider other options.

“We are also looking at ways to remove and resell boulders around Mendip District Council-owned land by Pomparles Bridge close to the A39 and Roman Way. The problem we face is that contractors are not able to use heavy lifting machinery in such close proximity to the people currently living on the grass and on the highway. This situation will continue to be monitored, as will the ‘encampment’ that was recently impacted by the flooding from the River Brue.”

The Glastonbury Living Spaces Panel says it is committed to understanding the current situation in Glastonbury, where people have been living in vans, caravans and tents for some years and in increasing numbers at various locations in the town.

“But there is a bigger picture here,” adds Cllr Wyke. “The roll out of Universal Credit has impacted badly on some people, allied to increasingly unaffordable housing for rent or purchase - creating a greater risk of homelessness, and we are picking up the pieces. Our local housing crisis is just part of a national one.

“We have approached Somerset County Council for discussions on any suitable land that might be considered suitable as a traveller site, particularly in the Beckery area, and considered carefully the issues of different land ownership.”

The Planning Inspector, following his hearing at Mendip in late August, has included comments on the Morlands site – his comments can be read here (page 5):

The situation of caravans and vans being parked on land and roads around Glastonbury is complex as ownership is different, and can be explained simplistically as follows:

“The Panel members are absolutely clear that they wish to start their essential work for Glastonbury by resolving issues in Beckery,” says Ms Wyke. “We have commissioned new odour testing from the sewerage works operated by Wessex Water, so that any decisions taken in the future on planning applications are using up-to-date results and data.”

The Panel hopes that housing in its widest sense and economic developments may take place on some of the Beckery land owned by Mendip District Council and also on land owned by the Beckery Island Regeneration Trust. That may include some site or sites for travellers in Glastonbury, either as transit sites or some permanent sites. That is still to be resolved due to the legal complexities and would require planning permission as well as resolution on the flood zone, on contaminated former industrial land, and also highways permission from Somerset County Council.

The Panel members are also aware of the ambitions of the Red Brick Building Directors as the not-for-profit organisation continues its efforts to breath new life into the old Morlands buildings while maintaining the heritage of Glastonbury’s industrial past.

Cllr Ros Wyke concludes: “I understand that residents of Glastonbury are concerned about the actions and motives of the new administration of Mendip District Council. I can assure residents that the members of the Glastonbury Living Spaces Panel and I are committed to working with Somerset County Council, with our own officers and advisors and with the Town Council so that we can find a way to ensure more affordable living in the town.

“We have to acknowledge that the highways in and around Glastonbury are the responsibility of the County Council and we are willing to commit our own time and resources to finding solutions that will satisfy all three tiers of Council for Glastonbury (Town/District/County) as well as the residents and visitors.”

The full membership of the Glastonbury Living Spaces Panel is: