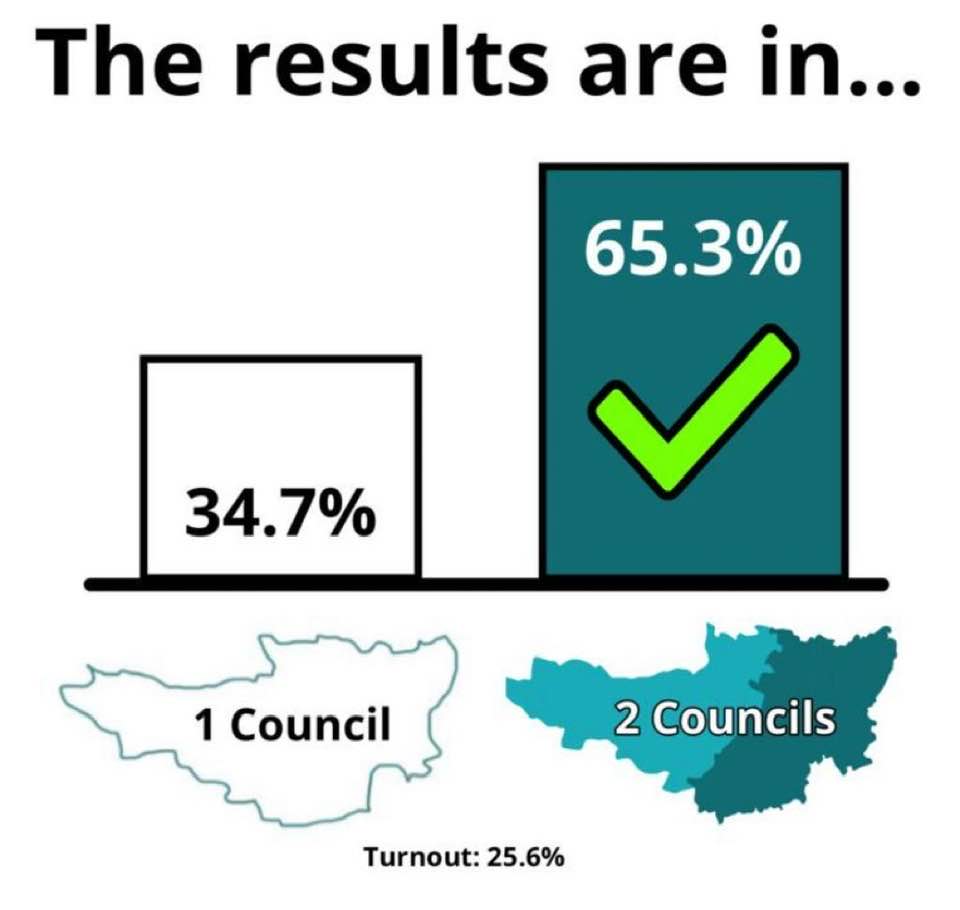 More than 110,000 people voted, meaning 25.6% of the electorate took part, which is a pretty respectable turnout for a poll of this kind. We asked a straight question, and got a straight answer. And it’s not the first endorsement we’ve received from the public for the Stronger Somerset path.

In November 2020 the respected Ipsos MORI canvassed local opinion and found three in 10 people (29%) preferred the Stronger Somerset proposal compared with 27% who preferred more collaboration between councils within the current structure. Some23% wanted no change at all. Just 15% said they preferred One Somerset.

The Stronger Somerset case, to deliver better value for money and to bring much needed service improvement and greater prosperity, is the people’s choice. Indeed, the Stronger Somerset proposal has been shaped in strong consultation with residents, NHS representatives, charities, community volunteers, town and parish councils, carers, and many more through their participation in more than 20 engagement sessions.

Somerset County Council and the government actively pursued local government change during the pandemic, diverting local focus and triggering inevitable and significant changes for local government ahead, that will affect Somerset residents’ services. Now we must hope that this clear preference is taken into account in the decision-making process by the Secretary of State – we are expecting a decision in the coming months, with a view to having new councils in place in 2023.

We put our faith in the voters of Somerset, and they delivered. I am very proud of Stronger Somerset, and its ambitious plans and would like to thank those who voted in this poll.

As I write this column, there’s more good news ahead for Somerset. Glastonbury is facing a fantastic future having been awarded £23.6m from the Government’s Towns Fund scheme. This is a ‘once in a lifetime’ amount of investment that offers great excitement and hope. Congratulations to all for the work that’s gone in to this successful funding bid. I’m looking forward to seeing the projects come to life!

Take care of yourselves and as always, do get in touch either on my email [email protected], or my Facebook page @Ros.Wyke.